The Marketing of Cape Verde to Investors

There is a specific government agency responsible for promoting Cape Verde to foreign investors. It is called Cabo Verde Investimentos (CVI). The folks at CVI do an excellent job in welcoming investors and providing information if you were to visit their offices in Achada Santo Antonio on the island of Praia. There are also two satellite offices, one in São Vicente and the other in Sal.

For many years, there was little if any online information available regarding investing in Cape Verde. In fact, CVI itself never had its own website until very recently. You can find it here: http://www.cvtradeinvest.cv/. CVI is even on Facebook now, under the name Cape Verde Investments. CVI is certainly to be commended for keeping up with the times.

The real question is how well is CVI marketing to foreign investors via their online presence? In this article, I provide a review of what is working and what is not.

First of all, that's quite a mouthful and barely understandable. There is perhaps a bit of a language issue here as it is written in English, but not well. Granted that Portuguese is the official language of Cape Verde, and it is excellent that CVI has made an attempt to present the case for investing in Cape Verde in English. After all, English is more widely spoken than Portuguese across the globe and certainly among big potential investors. But if you are going to present the information in English, make sure it is proper English and that it is understandable. Hire a translator. Or don't include such a statement since the purpose of the site it is quite obvious to anyone visiting the site. It sounds more like an exercise in self-importance.

The Richest Countries in the World

According to the publication, Global Finance Magazine, the richest country in the world in 2012 is Qatar with a per-capita income of US$106,283 as measured on the basis of purchasing power parity (PPP), using data from the World Bank.

Cape Verde is listed among the Emerging and Developing Countries. Interestingly, this category also includes many island nations around the world. I have long suggested that rather than attempt to compare itself to Portugal (arguably the world's original pre-modern superpower which now is considered one of the weakest members of the European Union) and other European countries which is completely unrealistic, or African countries which are the least developed and among the poorest nations on Earth, Cape Verde should instead compare its performance on the world stage to island nations around the world, and in particular, pattern itself after successful, independent Caribbean nations.

My reasoning is very simple and is summarized in the following points:

To demonstrate this point about Caribbean nations being the most appropriate model for the purpose of the development of Cape Verde, I have extracted the results from the list of the richest countries in the world to show how Cape Verde ranks against the Caribbean nations. I have also included the Seychelles and Mauritius which are two independent island nations in Africa, and I have shown where Portugal falls in comparison (is not at the top of the list as many might imagine). The list is ranked in terms of PPP (purchasing power parity) for 2012, the measure of per-capita wealth preferred by economists. 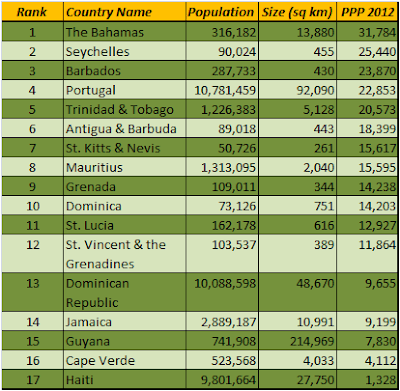 Cape Verde's incumbent government is about to make a fatal mistake in its budget for 2013. At a time when the second round of the global economic crisis is having a serious impact on the local economy, the government has proposed a sharp rise in the VAT (value added tax) on certain basic consumer staples and on certain business sectors. While the VAT on fuel prices will decrease, causing a welcome 20% drop in the price of fuel, taxes on other important drivers of economic growth could result in a major economic calamity in 2013.

Here is the backdrop of the current economic situation:

It is quite clear from all indicators that Cape Verde's economy is quite fragile at this moment. Yet, the government budget which seeks to raise revenue primarily by increasing taxes, represents a fundamental misunderstanding of economics. The dramatic increase in taxes at a time when the economy is being buffeted by external global economic forces that are not likely to assist with domestic growth will only have one undeniable effect and that is to deliver a death-blow to the economy.

In other words, this economic action will have exactly the opposite effect to that which is desired by the government. It will lead to a reduction in revenues and a major increase in the country's deficit.

CLICK HERE TO READ MORE »
Posted by Angelo at 7:09 AM 1 comments