Cape Verde is an island-nation of about half-million residents spread across 10 islands (one of which is uninhabited). The country boasts 4 international airports and a national airline called TACV ("Transportes Aéreos de Cabo Verde"). This airline possesses 5 aircraft. Two are larger jet aircraft (Boeing, Airbus) which make international connections, and three are smaller turbo-prop craft (ATR) which serve the domestic market. 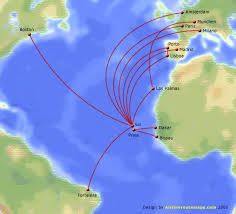 On the international routes, TACV connects the 10-island nation to 18 foreign destinations on three continents...using two aircarft! The three smaller propeller-driven aircraft connect 7 of the 9 islands on the domestic routes (the islands of Santo Antão and Brava do not have the conditions necessary to SAFELY host an airport for planes of the size of the ATRs used in the domestic services). This is quite impressive on paper...large aircraft flying the flag of a small country, domestically and internationally...it is presumably a source of national pride.

That's a really brief summary of TACV and it's services. Now, does anyone see what is terribly wrong with this picture? Perhaps nothing initially appears wrong until you know these additional facts:


The picture painted thus has massive flaws. The real question that needs to be asked and answered here is this: can anyone give a rational justification for why a nation with only half-million people really needs an airline that connects internationally to 18 destinations on 3 continents while wasting millions upon million of euros? Serving international destinations for the sake of national pride and honor is a ludicrous notion or a fool's dream.

In order for any airline to be profitable, it needs to operate a reliable schedule of nearly-full flights on every route it serves. Well here is another question: exactly who is TACV expecting to fill up these planes on these international routes...Cape Verdean immigrants who don't have sufficient critical-mass numbers in many of these international destinations? Tourists who are almost 100% served by the chartered airlines of the foreign tour operators?

Making matters worse, it seems not to be understood by the government which owns TACV that the lack of adequate, reliable domestic service (being able to get from one island to another when you need to get there and at a reasonable price) is a huge impediment to the growth of the economy!

The contradictions are stark. Imagine that you are a tourist or immigrant coming to Cape Verde on an international TACV flight, yet you cannot easily get to another island destination where you would like to go to spend your time and money. It would be a horror of unimaginable proportions for the visitor involved. Would you ever want to visit again? Or, imagine that you are a local business person and you have just got to get from one island to another for a time-sensitive commitment but you find that there are no seats available by the day you must get there. How much money are businesses in Cape Verde losing in actual costs or opportunities lost because of inadequate domestic air service? Here's another example, to get from the nation's capital of Praia, Santiago to the island of São Nicolau, you are forced to fly through Sal (or São Vicente)...there is no direct connection from Praia to São Nicolau, so you must effectively pay for two return tickets, Praia-Sal and Sal-São Nicolau! This is not to say that there should only be direct connections between islands, but if it is not even an option in some cases, how will those poorly connected islands survive economically?

We can also look at this issue from another perspective...how many island-nations the size of Cape Verde have their own international airlines? The answer is: very, very few. And those that do, act in an economically intelligent fashion. For example, Jamaica which has a population of about 8 times Cape Verde's and attracts about 4-5 times the number of tourists that Cape Verde does, once owned its own airline called Air Jamaica. Air Jamaica served Jamaica and several other Caribbean nations with international airline services. But much like TACV, the services were unreliable, non-competitive, and the airline lost millions of dollars annually. It was completely unsustainable as a business. So what was the solution? The government of Jamaica sold the airline off to another company called Caribbean Airlines. Caribbean Airlines serves the entire Caribbean region with "domestic" flights and makes selected international destinations as well. They don't do this with a handful of aircraft. For further information about small-island airlines, readers of this blog should read the report of the Commission on Sustainable Development on "Sustainable development of air transportation in small island developing states". The report is over 15 years old but is rich in research information and data that are relevant to the issues at hand in this article.

In conclusion, there are some pointed lessons and recommendations here for TACV management and Cape Verde's government (the owner of the airline). In other words, these are the steps that a rational, private owner would likely need to take to salvage TACV:
The Cape Verde transportation sector can be better served provided the owners of TACV (the national government) and the management of TACV are receptive to new ideas, are able to challenge outdated thinking and cultural chains, and are prepared to run with a bold, new vision for what TACV could and should become when it eventually grows up.
Posted by Angelo at 9:20 AM

Some good points Angelo, we are preparing an article as well about TACV, but we will be taking a different approach. Keep you posted!
Atlantico

Looking forward to your article!

Actually, the international routes (at least some of them) are much more profitable than the domestic routes. So eliminating them and concentrating on the deficitary domestic routes (which in the view of many should be a state-guaranteed service, given that it is unlikely a private company is going to be altruistic enough to operate flihts that don't make a profit just to ensure Cape Verdeas can move around within their country) would actually deepen the company's financial difficulties...

Jeff, I appreciate yor feedback. I remain puzzled how the international part of the company can be the most profitable yet TACV loses millions a year overal. You think that the domestic routes are losing millions of euros? Then they are completely mismanaging the company. Show me a cost analysis for each part of the company and I will show you the problem.

Please give us your feedback. Did you find this information interesting or useful?